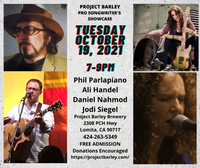 This is the 5th show in a new all pro songwriters showcase series at Project Barley in Lomita. Great sounding room and is owned and operated by musicians!! This will be an In house and live online event. No cover but donations are encouraged. Space is limited so arrive early to get a seat. Great selection of beer and there will also be pizza and wine available but you must order by 7PM. No reservations are accepted; Get there early to grab a seat. Masks are required to enter and while ordering refreshments. No cover but donations are encouraged. Here are the performers: http://www.parlapiano.com/index.html https://alihandal.com/ http://www.danielnahmod.com/

Phil Parlapiano is a versatile multi-instrumentalist and an A list musician whose musical journey has followed several unique directions. Born in New York City and raised by his musical parents, Phil learned to play the piano at the age of 4 from his talented grandmother, who also played mandolin and guitar. After playing the organ at his church, the road called to him leaving to tour with Joan Baez.

Parlapiano followed his musical path as a founding member of The Brothers Figaro. Signed to Geffen Records after a bidding war, the seminal folk rock duo recorded their critically acclaimed album, Gypsy Beat, published by BMG. After opening for John Haitt, Billy Bragg and Jill Souble, the Brothers called it quits but continued playing together backing folk legend, John Prine. This led Phil to a nine year stint with Prine, touring and recording CD’s including the Grammy award winning releases The Missing Years and Fair and Square as well as co-writing “Leave the Lights On” for the CD Lost Dogs and Mixed Blessings. After this Phil was asked to play on the Rod Stewart’s pivotal Unplugged and Seated album, after which followed a one and a half year touring stint with the rock icon. Phil was drafted into the smooth jazz world by saxophonist, Dave Koz, which culminated in co-writing a Chanukah song, “Eight Candles,” featured on the Grammy nominated December Makes Me Feel This Way. His songs have been featured in TV shows Friday Night Lights, Heroes, Alias, Felicity and most recently Once Upon a Time. Phil continues to work in the studio and live as a first call accordionist and keyboardist with the likes of Jon Bon Jovi, Carlene Carter, Lucinda Williams, Social Distortion, Elvis Costello, Tracy Chapman, The Dixie Chicks, Jonas Brothers, Iron Butterfly and others. You could see him in the TV shows Happily Divorced, The New Girl, Transparent and Lethal Weapon. Movie goers saw Parlapiano in the blockbuster film The Titanic as an accordion player during the memorable scene in the lower decks when Kate and Leo are dancing.

As of late, Phil’s work has been featured on the soundtrack to the Oscar winning film, The Shape of Water and the comedy Pitch Perfect 3.

Ali Handel “A triumph… From the first measure of the rocking “You Get What You Settle For,” you know you’re in good hands.” ~ Paul Zollo, American Songwriter Magazine

“Handal is a devilishly witty songwriter whose guitar is as blue and gutsy as her lyrics.” ~ Vintage Guitar Magazine

Moved early on by wise and resilient women, singer/songwriter Ali Handal wore out Carole King’s Tapestry album. As a cat-obsessed six-year-old (some things never change), Ali honored her initial musical heroine by naming her very first kitten “Carole.” Over the years, the sweet melodies and lyrics penned by musical sages King, Dylan, Lennon and McCartney captivated her. She had an epiphany when, as a teenager, she heard Led Zeppelin for the first time. Completely mesmerized by Jimmy Page’s seductive guitar riffs, Ali quit her piano lessons to pick up the guitar.

Now based in Los Angeles, Ali unleashes sultry, groove-filled songs upon live audiences, setting the stage ablaze with fiery guitar passages and soulful lyrics delivered by her powerhouse voice. She holds her own among the ranks of fierce female performing songwriters like ani difranco and formidable guitarists such as Jimmy Page. Music Connection magazine describes her as “earthy, natural, real and loaded with talent…a singer/songwriter with something to say… a gifted artist who brings insight and intelligence to her art.” When asked about her music and stage presence, fans simply say “badass.”

Ali’s songs have been featured in numerous films and hit shows like Sex and the City, Dawson’s Creek and iCarly. She’s toured Australia, Japan and beyond, provided backing vocals for Neil Young, and shared the stage with songwriting legend Paul Williams as his featured vocalist. Also a published author, Ali penned Guitar for Girls (Hal Leonard), an exceptional guitar method book & CD brimming with advice for aspiring female musicians, as well as encouraging quotes and remarkable songs from female songwriters in all genres.

Ali’s fourth full-length album, produced by four-time Grammy Award winner Seth Horan and released by Red Parlor Records, is a rockin’ collection of songs embodying the strength and sense of humor necessary to thrive as a woman in the 21st century. Cheeky songs like “I Love My Pussy.cat” and “Thank God For Birth Control” tap into her natural sass, while others, including “You Get What You Settle For” and “Better Man,” are chock full of an older sister’s tough love and the wisdom Ali has gained as she’s evolved as an artist and a woman. Ali is currently playing in an all woman Aerosmith tribute band called The Rag Dolls. She burns on electric guitar but can also bring it on acoustic in an intimate setting! She's the real deal is a sea of copycats!

Daniel Nahmod Orange County, California-based Singer/Songwriter, Producer and Humanitarian DANIEL NAHMOD (\pronounced Nay-mod‚) has performed his profound, heart-opening original music for over one million people in 45 U.S. states and Canada since beginning his music career in 1999... selling 110,000 CDs (and 10,000 printed songbooks!) to date and receiving literally thousands of standing ovations along the way. His songs are recorded and performed all over the world on a weekly basis. Recent media appearances of Daniel's music include Saturday Night Live, The Voice, American Idol, The Super Bowl, and the Today Show.

Daniel's poetic and evocative message of peace, love and compassion across all nations, cultures and faiths has found overwhelming acceptance wherever he has performed. He was a recent keynote performer at the Parliament of World Religions in Toronto in 2018 with his friend and collaborator Nimo (www.emptyhandsmusic.com), and has been featured on numerous cable and radio broadcasts in over 90 countries; at cultural festivals, interfaith and environmental fairs, workshops and conferences, youth rallies, 9/11 services; and as a keynote musical presenter at benefits for such organizations as Habitat For Humanity, Operation USA, Achievable and Anti-Defamation League. Daniel has also performed for various U.S. governors and mayors, and for congressmen in Washington, D.C.

Daniel has presented his spectacular music and message for nearly all of the world's major faiths, including Christian, Catholic, Muslim, Hindu, Buddhist, Jewish, Bahai, and Mormon audiences, and has worked with some of the most influential and brilliant speakers and leaders in the world --- including Jean Houston, Marianne Williamson ("A Return To Love"), Deepak Chopra ("Seven Spiritual Laws of Success"), Mark Victor Hansen ("Chicken Soup For The Soul"), Arun Gandhi (grandson of Mahatma Gandhi), Yolanda King (daughter of Martin Luther King Jr.), Rhonda Britten (of NBC's "Starting Over"), and Neale Donald Walsch ("Conversations With God").

In response to Hurricane Katrina, Daniel visited the Houston Astrodome for two days, walking amongst the survivors talking, shaking hands and singing songs. Following late 2004's humanitarian crisis in Asia, Daniel organized, produced and hosted two soul-stirring benefit concerts, raising over $15,000 for Operation USA, a Los Angeles-based relief agency working in Indonesia and Sri Lanka. And in 2000, he was nominated as National Hospital Volunteer Of The Year for his musical work at Cedars Sinai Hospital in Los Angeles.

Jodi Siegel Jodi was born in Chicago, Illinois; The Home of the Blues! She eventually relocated to Southern California and began playing and singing in countless blues, R & B, pop and original music bands throughout Orange Country, Los Angeles and San Diego. Over the years she has opened for and or shared the stage with many respected and legendary musicians including; Albert King, Robben Ford, Robert Cray, J.D. Souther, David Lindley, Fred Tacket and Paul Barrere of Little Feat and others. Her songs have been covered by Maria Muldaur, Marcia Ball and Teresa James. Her new CD, "Wild Hearts" features the A list of Los Angeles and is produced by Steve Postell. It has received great reviews from Patrick Simmons (Doobie Brothers), Walter Trout, Maria Muldaur, David Mansfield, Leland Skalr and others.