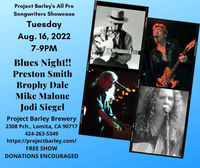 This is a once a month (every third Tuesday) show that is designed as a listening room for world class songwriters, many with hit songs, long touring/recording associations with music legends ETC... to play their original music in an intimate setting. NO COVER BUT DONATIONS ARE STRONGLY ENCOURED AND GO TO THE SONGWRITERS. Project Barley serves excellent Food (Pizza, sandwiches, salads), wine, and award winning beer. Food served till 8:30pm. No reservations so arrive early to get a table. This month we are doing a blues night! Some of my favorite local blues players!

Preston Smith is an musical anomaly. One of a kind in a sea of roots performers. He is a multi-instrumentalist (guitar, harmonica, percussion), a music historian, a great singer that knows a million songs AND if that wasn't enough, he is a critically acclaimed songwriter! An How does one categorize an artist, who during his career, has sung for Barbra Streisand's wedding, performed at countless functions for people such as Steven Spielberg, Bruce Willis, Aaron Spellings, Brad Grey ,The Cast of The Soprano's and the late Sonny Bono, played harmonica and scat rapped alongside Salt n’ Pepa on Quincy Jones’ TV show “Vibe”, and has had the likes of Bonnie Raitt, Eddie Van Halen and Jerry Lee Lewis, among countless others, join him on-stage for impromptu jam sessions. Preston appeared on “The Tonight Show” along with the late Jimmy Stewart and released an album on Curb Records entitled “Preston Smith.” He was featured on the hit movie soundtrack “Cocktail” starring Tom Cruise with the title song “Oh I Love You So,” which he composed, produced and performed. The soundtrack went on to sell over six million units foreign and domestically. He And His Band Performed on The Hit TV show "Star Search" .... Roseanne Cash then recorded his song “Black and White,” which released as a single, and was a hit on the country radio charts and was included in her greatest hits CD which went on to sell gold. Preston’s latest CD's “That Real Feel,” "Romancing The Blues" and "A Night Blooming Jazzman" and "Christmas Blues " and his latest release "Blue Skies For A Rainy Day" all which he produced and released on his own label many of which he played all the instruments himself or recorded live with his band in the studio, they are all a mix of his own Orginals and a combination of many genres of the past

Originally from Texas, Brophy Dale has gained a widespread respect for his passionate roots-rockin’ guitar and vocals. He's played all over the world, from Moscow to Melbourne, Anchorage to Zurich. lived in Texas to Africa, but now calls Southern California home. He honed his guitar chops in the Midwest, mostly Ann Arbor/Detriot area in countless Rock, R’n B, Blues, Oldies, and Country bands that set him on a journey and has taken him from local bar guitar hero to an international recognized performer.

Brophy’s first big moment came when he got to backup the late great Memphis soul singer, O.V.Wright (Nickel and a Nail) for a few gigs. Moving out West in the late 80s, Brophy worked/toured with Robert Lucas of Canned Heat, Smokey Wilson, Joe Houston, & King Ernest to name a few, on the Southern California blues scene. He's also had the opportunity to work with some of his heroes, which include Dave Edmunds, Delbert McClinton and a few tours with Scotty Moore.

The last ten years Brophy has worked steadily with Alligator recording artist Lee Rocker, a Rockabilly/Americana cat who came to fame in the '80s as bassist for the wildly popular Stray Cats. He's recorded six records, with co-writes on the last three and been on several compilation records with Lee also. Brophy’s playing can be heard and on sound tracks for Kids ESPN in Japan to placement on TV shows with Lee, Numbers and the WB show Supernatural.

Mike Malone has been a fixture on the SoCal blues scene for more over two decades. He is the founder and leader of Mike Malone & The Soul Collectors. When he isn't fronting The Soul Collectors he can be found lending his talents on stage and in the studio to Marc Ford & The Neptune Blues Club, Country guitar slinger Justin Foutz, the band Trouble No More and anyone up for a jam! He has spent a good part of his career as band leader and piano player for Texas Sax Honker, The Legend Joe Houston. He credits Joe as being his "musical father". Malone has worked with numerous other artists including: Eddie "Cleanhead" Vinson, Mick Taylor, Top Jimmy, Papa John Creach, Pee Wee Crayton, Guitar Shorty, Deacon Jones and Big Joe Turner He recently released a solo album called "Just Passin Thru."

Jodi was born in Chicago, IL. The Home of the Blues! She eventually relocated to California and began playing and singing in countless blues, R & B, pop and original music bands throughout Orange County, San Diego and Los Angeles.

Over the years Jodi has opened for and or shared the stage with many respected musicians including: Albert King, Robben Ford, Robert Cray, J.D. Souther, David Lindley, Fred Tacket and Paul Barrere (Little Feat) and countless others. Her songs have been recorded by Maria Muldaur (“So Many Rivers To Cross,”-cowritten with Daniel Moore and “If I Were You”-cowritten with Danny Timms) Marcia Ball (“So Many Rivers To Cross.”) and Teresa James ("Come Up and See Me Sometime"-cowritten with Danny Timms) During her career, Jodi has created a heady and dynamic stew of musical influences (blues, pop, R & B, soul and jazz) into a sound and a style that make her a triple threat; songwriting, singing and guitar playing. Jodi’s fine-tuned solo performances are likened to a “one-woman” band!! Her truly original style can fill a room with explosive slide guitar, jazzy vocals and a fun, easy going rapport with her audience. She can go from funky bluesy grooves to folk, to jazz and back again with ease. She’s an old soul with a fresh sound. Her new CD, “Wild Hearts,” produced by Steve Postell (Immediate Family, David Crosby, Eric Johnson, Robben Ford, Iain Matthews), is filled with great songs, cool grooves, intimate, smart lyrics and some of the best of the best musicians in Los Angeles today including; Mike Finnigan (organ, piano), Hutch Hutchinson, Abe Laborial Sr., Alphonso Johnson (bass), Russ Kunkel, Michael Jerome Moore, John Ferraro, Arno Lucas (drums, percussion), Joe Sublett (Saxophone) and Maxayne Lewis and Clydene Jackson (background vocals). Each song has a soulful delivery with an undeniable down-home elegance.