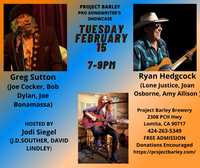 This is a once a month, every third Tuesday of the month, series dedicated to professional songwriters who have had hit songs, played professionally with legends, toured the world etc...This month will feature two Los Angeles legends in music and songwriting; Gregg Sutton and Ryan Hedgecock. No cover but donations are strongly encouraged and go directly to the songwriters themselves. Project Barley is owned and operated by musicians in the South Bay town of Lomita (Los Angeles) on the coast near Redondo Beach. They have award winning crafted beer, excellent food (pizza, sandwiches, salads) and an amazing ambiance in the room, not to mention an excellent sound system. Come early, grab a table and order some food before 7:30Pm... GREG SUTTON Gregg Sutton is a world class songwriter, singer, bass and guitar player, best known for having co-written the 1988 hit ballad, “Stop!”, performed by UK artist Sam Brown. Sutton’s accomplished and expansive career has seen his songs recorded by the likes of Joe Cocker, Percy Sledge, Eric Burdon, John Farnham, Heather Small and Joe Bonamassa, to name but a few. During the 1980s, he played bass for Bob Dylan on Real Live (1984). He also played bass for Barry Goldberg, Sass Jordan, Carla Olson, Mick Taylor, Dave Alvin, Coup de Grace, The Pets, KGB (along with Carmine Appice), Tony Gilkyson, Avery Sharpe and Katy Moffatt.

He is also featured on The Rolling Stones' Lost & Found Vol. 2 on the track "Tombstone Blues" along with Carlos Santana, Bob Dylan, Mick Taylor, Colin Allen and Ian McLagan.[2]

He was the musical director for Andy Kaufman's show at Carnegie Hall in 1979. He is also featured in the 1980 movie Andy Kaufman Plays Carnegie Hall and as an actor in the motion picture Man on the Moon, starring Jim Carrey. He has appeared in the 2015 documentary Kaufman Lives.[3]

Born and raised in New York, Sutton began his career touring with various bands, during which time he signed a deal with Columbia Records for his artist project. The release of his debut solo album, Soft As a Side-Walk, received critical acclaim and elevated his songwriting status.

In 1985, Sutton joined the country rock band, Lone Justice, and co-wrote the songs “Dreams Come True (Stand Up and Take It)” and “Inspiration” which were included on their second LP Shelter. After the band broke up in 1987, Sutton continued to write with its former lead singer, Maria McKee, for her debut solo album, resulting in the creation of the songs “This Property Is Condemned” and “Breathe”, the latter of which was the album’s lead single.

The collaboration with McKee started a prolific period of songwriting for Sutton, most notable for the composition “Stop!” which was co-written with and recorded by Sam Brown. Upon its release in 1989, Brown’s version of “Stop!” became a global phenomenon, reaching #4 on the UK Singles chart and selling over a million records worldwide. In 2004, four-time MOBO award-winner Jamelia’s cover of the song gained popularity when it was used in the soundtrack for Bridget Jones, the Edge of Reason and went on to become a UK top ten hit. Off the back of the success of “Stop!”, Sutton partnered up with Curtis Stigers in 1992 to write the sensation “You’re All That Matters to Me”. This became one of Stiger’s biggest singles from his multi-million selling debut album ‘Curtis Stigers’ and reached #6 in the UK chart. RYAN HEDGECOCK Ryan Hedgecock is an American musician, songwriter and producer. He was the founder of Bedrock, Lone Justice, Parlor James and is Rattlesnake Daddy. A true Los Angeles legend and Americana innovator. “I like to think of myself as a song/genre hunter,” says Ryan Hedgecock. “When I hear something in my head, I go out and try to find it in the real world. And if I don’t find it, then I create it myself.” Over the course of his amazingly diverse career, Ryan’s search for the rare sound and the uncommon lyric has taken him over the boundaries of rock, through the fields of country and deep into the blues. As a singer, songwriter and guitarist, he’s shared the stages with legendary artists like U2 and Tom Petty, toured internationally and recorded with top producers and musicians. But he’s most at home discovering new approaches to familiar musical genres, then serving them up with an idiosyncratic twist that reflects his California roots and his expansive musical tastes.

Growing up in the Los Angeles area, Ryan was drawn to music at a young age and was playing in neighborhood bands by age 12. An early love for Led Zeppelin and the Grateful Dead evolved into a passionate exploration of traditional country and early rock ‘n’ roll. After a brief stint with the rockabilly combo Bedrock, Ryan founded Lone Justice with Maria McKee, a groundbreaking unit that tapped into the rich indigenous music of Southern California as it took the local club scene by storm. Its fusion of country soul and punk rock energy gained it a fervent following and critical acclaim. In hindsight, Ryan sees his experience with the band as just one part of an ongoing musical journey: “Lone Justice was my first successful attempt at taking old song forms and giving them a modern approach” – but it was just the beginning.

From there, Ryan formed several all-original bands and released his debut solo album, Echo Park. Next, he joined forces with singer-songwriter Amy Allison to launch Parlor James, a vocal harmony duo that revamped classic folk and country balladry with a dark edge. After successfully releasing an EP and album, Ryan moved on and continued his forays into undiscovered musical terrain. Taking a cue from the Trip Hop movement of the late 90’s, he adopted the persona of Rattlesnake Daddy to combine roots music elements with cutting edge technology: “It was my goal to take samplers, electric guitars and massive powered speakers and use them in a band setting that could break down the wall between artist and audience. Rattlesnake Daddy offers a way to build community on stage that’s brought me some of the most intense musical experiences I’ve ever had.”

Always restlessly hunting for the next new song/sound, Ryan is currently recording a country album with Lone Justice partner and longtime friend Marvin Etzioni. He is also delving into his archives to release unheard tunes from earlier projects. Live, Rattlesnake Daddy has recently re-emerged in the thriving South Central Blues scene. He continues to perform with veteran blues artists at South Central’s home-grown venues, sparking musical interchanges that inform his own work. As ever, Ryan’s musical evolution continues.

“At heart, I’m a folk musician,” he says. “I’m not a purist, though – I use whatever is available and re-interpret the sounds the way I feel them. That’s what folk musicians have always done – it keeps the tradition alive. Really, I don’t see any differences between artists like Hank Williams and Keith Richards. It all draws from the same well.” For Ryan Hedgecock, the hunt goes on wherever the music leads him.